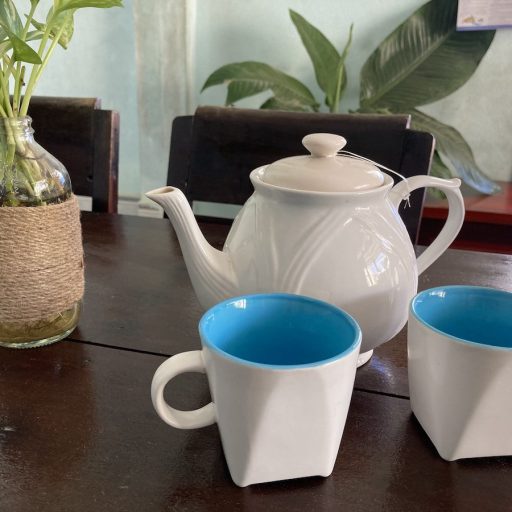 and grown only on Cham Island – available here.

The Cham people are an ethnic minority in Vietnam. Their ancient culture predates the history of modern culture. They have beautiful artwork, rich traditions, and healthy lifestyle. The Cham Museum celebrates their statues, artifacts and customs.

Cham Island (Cù lao Chàm) is actually the name for a group of small islands off the coast of Vietnam, named for the people that lived there. This is in Vietnam’s territorial waters, farther out from the land, part of the larger South China Sea. There are eight small islands, tho only one is inhabited today. On this island are a two main villages: Bãi Lăng and a few minutes further along the coast, Bãi Hương.

Only a few years ago, the residents of Cham Island didn’t have running water or electricity. Their water came from hand-dug open wells. People lowered a bucket on a rope and pulled up enough water for a jug to carry back to their home. Electricity, too, was available in small doses. Solar panels would pour a few batteries full of juice, which would excite a small number of light bulbs for a few hours.

Electricity was brought to the island a few years ago, but many old customs remain. Even today, hot showers are rare. The hot water is heated by hand and mixed with the cold. “Showers” are scoops of the now warm-water poured by one’s self carefully contorted to reach the “pits”.

Most of the activities are in Bãi Lăng. Snorkeling, scuba diving, swimming, fishing, hiking and relaxing in hammocks were the favorite pastimes. There are homestays where people rent out rooms for vacationers. Before COVID, there were some tourists who bought handmade souvenirs.

The smaller village further down the coast is Bãi Hương. There are only about 400 people in this quiet fishing village. It’s very relaxing to stay here. In Bai Hoang, too there are Homestays and also Yoga retreats in the midst of the calm island life. Villagers in both villages practice the ancient craft of making Cham Island Tea.

About twenty ingredients go into this tea. But I don’t know how many for sure. The women aren’t telling. You can buy their tea but not their recipe. Only the essentials are on the label. The elder women who make it aren’t about to share their recipe. That’s a secret they pass along to each other. They only share the tea.

Only Available on Cham

The men are actually our in their Coracle (Thuyền thúng) catching fish to feed their families instead of showing too-busy people how to relax. The island, once alternately busy with tourists and sleepy after they leave, is quiet. Now those tourists are gone. The quiet here has a different feel now.

The women are harvesting the Cham Tea (Lá Rừng) and selling it to feed their children. The homestays are mostly empty. The tour guides are unemployed. The fish are here, the residents are here and the the trees are here. Like everyone, the people are waiting for life to start again.

There are only two ways to get to Cham Island. The old fashioned way was a slow boat. The traditional blue Vietnamese with painted eyes on the bow and the red Vietnamese flag. These boats chug-chuged along up and over the waves. It’s only about ten kilometers from the ancient town of Hoi An, but their slow trip would take hours. Even today, this is how most freight arrives on the island.

This is my third trip to Cham Island. One year ago I came here as part of a tourist group. We were shown the hand-dug water wells and the fishermen teaching the too-busy people how to relax. On the first trip, the old women offered me some tea. At first I refused. I’m a coffee drinker, not a tea drinker. Besides, I don’t usually buy souvenirs. I visited the museum.

The Tea Called Me

The second trip was different. I walked by the tea seller again. I had a little room in my bag and I had a little money in my pocket. I bought a bag of tea. When I got home, the tea called to me. I refused. Then, I tried the tea one day. At first, it was so subtle that I didn’t notice the calmness come over me. I was calmer. A couple days later, I made a second cup.

Now, you have to understand that this tea looks different. It’s organic. I mean, really organic. This is not your typical teabag. You will need a strainer. It has whole leaves and twigs. Maybe there is something to this after all. I used my smartphone to decipher some of the ingredients. The label says it is good for the liver. Whatever it is, it brought me back to the island.

This is my third trip and this time I am relaxing in a hammock. This is my first vacation in about ten years, maybe longer. There was only one way to get this tea – on Cham Island – and I was going to get some. This time I will buy more tea.

If you are a tea drinker, you will like Cham Tea. It is subtle, calming and healthy, just like Cham Island and just like the elder women who sell it. If you are not a tea drinker, this one might surprise you. Don’t expect to find a different taste. In fact, I recommend that you don’t have any expectations.

Let this tea sneak up on you like it did me. There is a surprising calmness in this tea that has been grown for centuries, and gathered by the women of Cham Island. There is something magical about this tea. It brought e back to the island. See what effect it has on you.

Cham Tea comes directly from the villages of Cham Island. From the land of a simpler, island lifestyle where the elder women continue a timeless tradition of gathering tea leaves by hand. One woman told me that each bag will last five people ten days. I didn’t count the number of cups, but it’s at least that many. Besides, it’s not about numbers, it’s about the slowing down – the calming.

The people of Cham don’t speak a lot of English, but they do understand tradition, feeding their children, and living a healthy, mostly vegetarian, organic life. They do this by selling their tea. This time, I brought some of that tea back with me. This will continue the traditions on Cham Island and support them.

The regular price for tea is ten dollars, shipping and tax included, but since you are reading this, make me an offer. Whatever amount you donate will help the elder women of Cham Island, continue their traditions, support a subtle, calming and healthy life for you, and for them. Just say how many bags of tea you want and I will send it to you. (Limit of one bag per donation.)